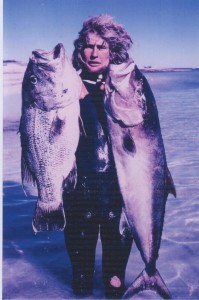 Glynn Dromey was a passionate spearfisherman with a particular penchant for chasing pelagic species. He has held a number of Australian records including largest sailfish and largest yellowfin tuna. This in an era when the focus was on reef species. Tragically, he was taken by cancer at the age of twenty nine back in the early 1980’s. Recognized as a top spearo and a person who had time for others learning the sport, it was in his memory that a competition held its inaugural meeting in 1996 and has continued on an annual basis ever since.

The Glynn Dromey Memorial Shield is organized by the West Australian Undersea Club and is advertised both locally and interstate. It aims to foster a competitive spirit between spearos and promote the virtues of selective hunting. Using breath hold diving is the most extreme way to bring your target onto the boat. It requires fitness, regularity of practise and encourages a healthy lifestyle.

Conditions on and in the water can be rough. Visibility may be poor, there could be a 2-3 knot current running, wind and swell can combine to produce an unpleasant experience. There is nowhere to lie down when you’ve been seasick in the water. Then there is the ever present threat posed by sharks in a sport where the hunter can become the hunted. In this environment a competition focuses effort on planning and performance within time and species constraints.

The competition goes for 6 hours. Points are awarded for one fish of each nominated variety and for its weight. The minimum weights for each fish far exceed those applied by the Fisheries Department. To differentiate it from other competitions, this one has a few distinctive features.

Firstly there are a limited number of species, those which are targeted by most spearfishers for their eating and sporting qualities. Secondly, all fish are entered without guts or gills. This makes for better eating when later the fish are either reclaimed or donated. Scales are on hand at the beach for potential record captures. Thirdly, prizes are awarded one per competitor with subsequent prizes going to the next competitor in that category without a prize. The competition is now recognized as the pre-eminent event on the West Australian calendar, attracting approximately 50 divers, some of whom are recognized worldwide for their exploits. 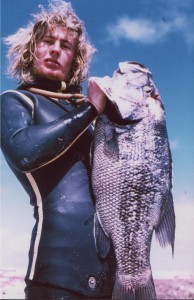 Lancelin was chosen as the venue which would offer better fish along with a good weekend away, a chance for competitors to socialize and have a beer without being too far from Perth. It is far enough away to ensure no-one has a ‘local’ advantage yet close enough to be a single day comp. The event is conducted from individual boats. Visitors without a boat ride are accommodated on members’ boats.

Fish are weighed, points tallied, prizes presented and winners photographed. The day starts with a spirited departure from the boat ramp as the pairs strive for maximum points and ends with congratulations for all those who participated in a sport which demands passion and commitment just to be average.