Arriving at the Lancelin beach sign on point with the sun yet to be seen it was more like a scene from the south coast; it was freezing! At this point I was wishing I had bought my 5mm winter suit rather than the 3mm summer suit! As the pairs began to arrive the anticipation was building. 14 pairs signed in and after a quick safety meeting the 2017 Glynn Dromey pairs spearfishing competition was underway. Quick off the blocks were last years champs Mael and Troy in the nifty v17r; they had set the bar high last year and weren’t about to lower it this time around. Myself and Ryan were not in such a rush and slowly prepped ourselves in the not so luxurious but trusty tinny! This was the first offshore mission in the tinny in quite some time however the launch went smoothly and soon after we were pottering up and down the beach waiting for our buddy boat under the control of experienced (nice way of saying old) skipper Joe P.

As we began to make our way out of the safety of the reef we noticed a fellow spearo crew in some trouble; unfortunately the power pair of Ben Coy and Graham Carlisle were to play no further part in the day with engine trouble ruling them out. Making our way out beyond the inshore reef the conditions were looking fantastic the wind was down and the swell was behaving itself, however as we ventured into the 15-20m mark the water was not clearing up and we were bound to be swimming in minimal visibility. As we parted ways with Joe P and his crew myself and Ryan decided to hit some shallower reef in the 8-10m mark, as we peered over the gunnel into the water and could not see the top of the reef we knew we were in for a tough days diving. Visibility in the first spot was around the 2-3m mark with a lot of particle and debris in the water and strong surge around. We quickly changed spots and headed for the south side of little bomba break usually decent for popular competition species such as goatfish, tarwine, silver trevally, sea sweep and baldachin grouper. We anchored a good swim off the breakers as the swell was already beginning to rise the visibility did not improve from here on out as we moved in closer to the breakers the fish life did improve however we were unable to find any of the fish that we were looking for.

After a lot of diving and being bashed around the breakers we decided to pull the pin on that spot and move on, in the process we came across a few other competitors who were all struggling in the unfavourable visibility also. Moving further inshore things went from bad to worse where the visibility was so bad I almost swam directly into reef on several occasions (i would say less tham 1m at times). After returning to the boat we decided to make our way back toward the lancelin jetty and eventually found a small patch of bearable visibility closer to the islands however no fish were to be found. We agreed to pull the pin and head back in to the beach where the swell had defiantly risen as the surfers were out in plagues. With a bit of help from mother nature we retrieved the tinny and headed to the local park for a quick freshen up.

We returned to the beach to see if anyone else had decided to return home early and ran into Caleb Moore, Sam Phatouros and their boaty ‘shark attack survivor’ Sam Dawson. Here is a quick recap of their day: “Looked fishy on the way out, lots of bait and free jumping tuna seen as we travelled way up the coast. But it was quite obvious the swell had jumped up a lot overnight and that was very evident when we hit the water, with a lot our favourable ground proving really surgy and a distinct lack of quality fish life. A few hairy moments when we swam into some shallower ground, only to hear a short sharp warning from Sam as I look up and see a 3m wave about slam on top of us. Definitely up there with some of the toughest conditions I’ve dived in.. Move to some shallower ground inside the outer reefs that had some protection from the swells, while the vis wasn’t good it provided us with better conditions and fish life for most of our species to weigh in. A few more times moving spots but it was obvious with the tide change the water was getting dirtier.

Heading back to the beach thinking we had flunked our whole day, but after chatting to fellow competitors most of everyone found it just as tough as us. Definitely made that roast beef and gravy roll taste great after pinballing around the reef in all the surge all day haha” – Caleb Moore As the conditions worsened retrieving was becoming more difficult but there were many helpful spearo’s on the beach willing to help out and everyone was able to be pulled safely out of water. The weigh in was held at the Lancelin Angling Club and as the pairs began to sign off with the very vigilant Sam Phatouros, the stories began to be told and it was evident that many pairs had just as tough day as us! It was apparent that those that travelled north of the islands found some decent visibility with some reports of up to 15m visibility around wedge island. A total of 8 pairs signed off and 6 pairs weighed fish in. A few large heshen bags with recognisably tails protruding proved that several divers had a decent day on the water even in the unfavourable conditions.

Last years champs Mael Coret and Troy Eggins had done it again with 9 species for a total of 1700 points they had blown the competition out of the water ;D (pun intended). There bag included a 13+KG Spanish mackerel a 8kg+ YTK, dhufish, baldchin grouper, silver trevally, breasea cod, goatfish, sea sweep and Tarwine. The next closest was Nick Croucamp and his partner Justin Edwards who shot 5 species. Third place went to Caleb Moore and Sam Phatouros with 4 species, in fourth place was Ross bullet and George Turzi with 2 species and finally 5th place was Sean Price and Matt Hansen also with 2 species. The mystery prize was a formality and went to Joe Petrovich and his Baldchin Grouper. After the shield was handed over to the victorious pair of Mael and Troy for another year and the prizes were distributed to all the lucky winners the hungry (and thirsty) spearos enjoyed a delicious beef and gravy roll and a few well deserved frothies.

Thanks to all those who helped to make the day run smoothly, Special mentions to Graham Gould, Aleks Ceklic, Michael Treble and all our generous sponsors, in no order; SpearWest, Andre Spearguns AU, Penetrator Fins, SpearAus, Neptonics Australia, Powerdive, Dive and Fish, Shark Shield and Ross Bullet and Family. Also, thanks to the Lancelin Angling club for hosting us again this year.

Last but certainly not least, the family and friends of Glynn Dromey, for letting the WAUC hold this event in his memory each year. 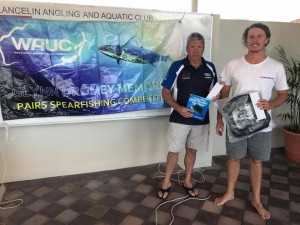 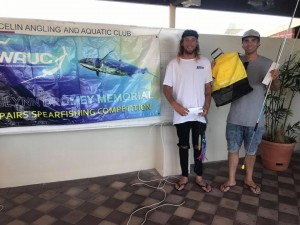 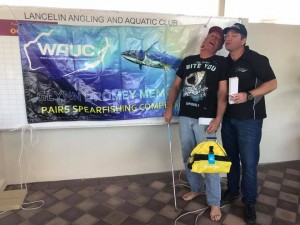 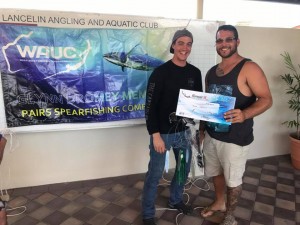 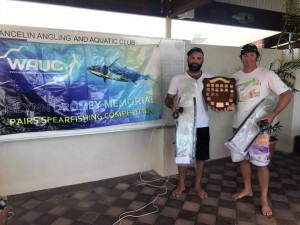 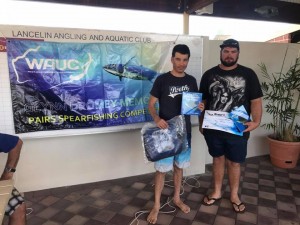